skip to main | skip to sidebar

To say that Debbie loved Christmas would be a huge understatement.

She knew all the Christmas carols and could sing them from memory and on key. She was in the church choir when she was younger and enjoyed practicing for Christmas and performing at the Christmas services. Mom loved Christmas, too, and they would always find some FM radio station that would play Christmas music constantly for all of Christmas Eve, if not more.

She wrapped presents with great care. Working with her sister and mother at Pumphouse Gardens she decorated beautiful wreaths with handsome ribbons.

Yep - for Deb Christmas was special.
Posted by Bob Thomas at 2:34 PM No comments:

I was backing my car into the barn tonight and I thought of PopPop Ernie
Thomas. He was born in April 1901. When he grew up there were no or very few cars in South Jersey. He always kept his cars under cover. He backed his car into his one car garage very carefully. He had to because the garage was old and the cars got bigger and bigger. His last car was a big boat of a station wagon. He barely had room to get out of the car after parking it. To keep from backing up too far he had hung an old tennis ball on a string next to the place where his driver side mirror was supposed to end up. It was a neat trick to do that. I wonder if he thought it up or someone suggested it to him. 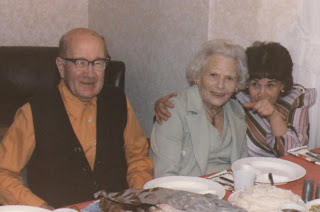 He drove past the time that he should have been driving. He told us that he couldn't tell if the lights were red or green at the intersection of Gloucester County 553 and the Delsea Drive (NJ 47), there was merge lane and he would just keep going. Just a little way down 47 there was a MacDonald's that he would go to for coffee with a bunch of old friends. The coffee was free at a certain time in the morning for guys over 80 or maybe 75.

Ernie died at age 91. He enjoyed a lot of years past the age of 80. He never lived in a nursing home. He lived at 50 N. Fernwood Ave in Pitman until about a week before he died. One morning he woke up and made some coffee and was eating a grapefruit the morning that he asked my father come and look at his leg. While drinking his coffee his foot went to sleep. He slid up his pant leg and looked at his leg and it was purple. There was a blood clot in a vein in his leg.

My father drove down and looked at his leg. I don't remember if they went to the doctor first or straight to the emergency room - but he ended up at Underwood-Memorial Hospital in Woodbury, NJ. The doctors there thought that his blood chemistry was out of whack and wouldn't operate until they got his potassium level between certain limits. They waited too long and a clot went to his brainstem while they waited. He lapsed into a coma and he never regained consciousness.

Dee and I put our cars under cover almost every night. I back in like PopPop Ernie. I don't have a tennis ball on a string to guide me but I do have a bunch of salvaged "roadkill" license plates that I have found on the shoulder of the road nailed to the back of the barn to guide me. In the other garage I line things up with the porch that I see through the garage window.

What does all this mean?

I don't know exactly - just some things that I was thinking when I was backing my car into the garage.
Posted by Bob Thomas at 6:53 PM 1 comment:

Gateway's First Four Years If you were there at Gateway's beginnings as student or staff you are welcome to request an account and add to the store of memories. 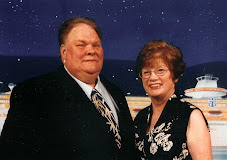 Deb and Jeff on a cruise in 2006. - Most photos can be clicked on to see a larger image.